Evolution PCC is a very flexible risk vehicle and every application to utilise our vehicle will be assessed on a case by case basis. We have provided some examples of where we should be able to assist you in providing a protected cell solution

The Captive model is a tried and tested means for Corporate Groups to minimise their Total Cost of Risk.

When dealing with European risks, however, there is an issue in that the captives need to either be licensed in the EU to write those European policies or alternatively obtain fronting into Europe from an EU licensed insurer.

Having a captive licensed in the EU is a costly and capital intensive exercise and a major barrier to entry to companies operating in Europe. With Solvency II on the horizon, the costs of compliance with the EU’s insurance regulations are ever increasing. These include both capital costs which are very likely to increase under a Solvency II framework as well as the costs of operating a European insurer, in terms of fees and support services.

Evolution Insurance Group is an independent privately owned group of companies which provides traditional and innovative commercial insurance solutions to its business partners around the world. Using our regulated companies in the UK, Gibraltar and Guernsey, we work with a range of industry professionals to achieve long term sustainable business relationships. Our highly regarded and experience team work closely with our introducers and clients to create structures which insure a range of volume and bespoke risks worldwide.

Evolution Insurance Company Limited is a Gibraltar registered and regulated insurer which is able to passport (write insurance) into all of the European Economic Area (EEA) territories, made up of EU countries and three additional countries in Europe.

The additional EEA territories are: Iceland, Liechtenstein and Norway.

Evolution Insurance PCC Limited is a Guernsey registered and regulated PCC established in Guernsey at the start of 2011 and is able to offer entities an alternative to having to utilise a stand-alone incorporated captive company.

Guernsey as a Captive Domicile

Guernsey is a major centre for the provision of insurance products and services, ranging from captive insurance company structures to intermediary services, and has an outstanding reputation for innovation and professionalism in international insurance. Guernsey has grown to become the leading captive domicile in Europe and the fourth largest captive domicile in the world. 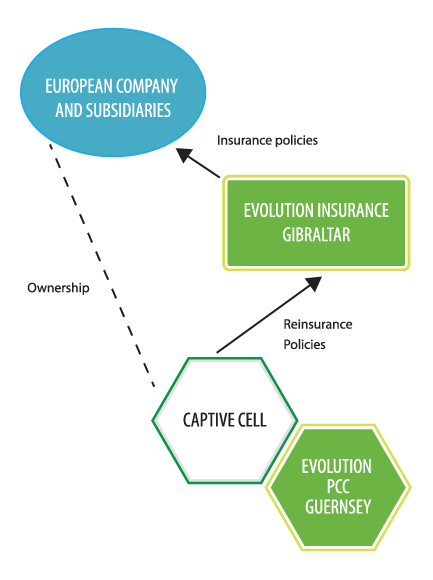 The Evolution Solution is a cost effective means for companies with European operations to make use of captive solutions. Rather than form or continue to operate a direct writing captive we would encourage you to consider this option.

The basic structure of operation can be seen on this diagram.

By utilising a fronting company, the cell captive is still able to retain the risks that the parent company wishes to self-insure, but without the capital commitment, time and administrative cost of owning an EU direct writing captive.

The following comparison is based on a captive writing €5m of premium and considers only the direct operating costs: 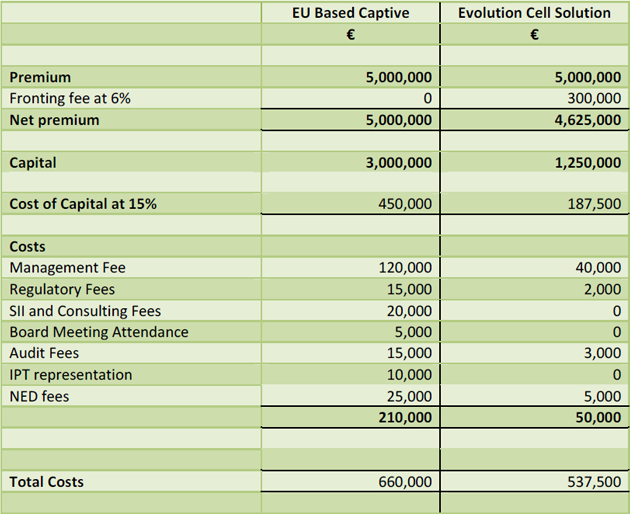 The Evolution Insurance, Gibraltar fronting fee of 6% compares favourably with the standard 7.5% to 10% charged by most EU fronting companies. This rate is only available to parties utilising the Evolution PCC captive solution. The costs associated with the management of a protected cell in Evolution PCC, Guernsey are also much reduced when compared to costs incurred in running an EU direct writing captive.

In addition to the direct cost saving, the Evolution Solution minimises management time spent on EU direct writing captive related matters in terms of dealing with regulations and regulators, along with satisfying mind and management considerations.

To provide fronting to an Evolution PCC, Guernsey Cell, Evolution Insurance in Gibraltar has various requirements which must be met, including:

The Evolution Group is able to offer a genuine alternative to owning an EU direct writing captive, both for those already incurring the time and expense of owning such a vehicle who are expecting those costs to only increase under Solvency II and also for those considering establishing such a vehicle in the near future.

Should you require any additional information on the activities and EU capabilities of the Evolution Group then please do not hesitate to contact William Bidwell in the first instance or a member of the Robus service team.